If you are not satisfied with your purchase please let us know. We will give you a free return shipping label to send the item back. We normally only allow up to 30 days, but exceptions can be made.
The Belkin N600 Wireless Dual-Band N+ Router is the fastest N600 router at long range versus other leading national brands.† The Belkin N600 DB Wireless Dual-Band N+ Router features advanced wireless performance for video streaming, online gaming, and other media-intensive applications. Belkin's exclusive MultiBeam technology minimizes dead spots and provides advanced coverage throughout your home, allowing you to stream HD video on more devices in more locations. The N600 DB can be installed in three easy steps, and preset security settings ensure that your network is safe as soon as it's up and running. With speeds of up to 300 Mbps + 300 Mbps, four Ethernet LAN ports, and one USB port, the N600 DB provides versatile, multi-device coverage. The router also comes with a suite of Belkin apps designed to enhance your wireless experience. † Results based on independent third-party testing. Visit belkin.com/router-speed for details. *The standard transmission rates—300Mbps (for 2.4GHz), 300Mbps (for 5GHz), 54Mbps, and 11Mbps—are the physical data rates. Actual data throughput will be lower and may depend on the mix of wireless products used.

Enjoy a high-speed Internet connection for multi-video streaming and online gaming with the Belkin N600 DB Wi-Fi Dual-Band N+ Router. This router is the fastest N600 router at long range versus other leading brands. It allows you to surf the Web, download large files, and play online games on multiple devices throughout your home. Media Server by myTwonky simplifies photo and video streaming to mobile devices, while the router's Dual Band technology lets you enjoy different activities without slowing down your connection. You can also filter unsafe or inappropriate Internet content with Parental Control powered by Norton.

Fast connection speed lets you stream movies on one device while you send emails on another. .

MultiBeam coverage allows you to connect to the Internet from anywhere in your home. .

The Fastest N600 Router at Long Range vs. Other Leading Brands 1

The N600 DB also features Media Server by myTwonky to make it easier to enjoy all your favorite media files. Simply plug in a USB drive and stream movies, music, and photos to multiple devices like your iPhone, iPad, or Smart TV.

Using exclusive MultiBeam antenna technology, the N600 DB lets you connect to the Internet on multiple computers or mobile devices from virtually anywhere in your home.

For example, you can stream video downstairs while your roommate or family member upstairs downloads music.

Protect your entire network with Parental Control powered by Norton. Block unwanted content to all your devices automatically with this customizable and easy-to-use software.

What's in the Box

¹ Test measured average throughput within a home network when connected devices are placed at various distances from router. The Belkin router had the highest average throughput at measurements greater than 30 feet. Leading routers were determined by identifying the most commonly purchased routers that collectively accounted for a majority of router sales. The stated transmission rate is the physical data rate. Actual data throughput will be lower. Actual speed and distance will vary depending on interference, network traffic, building materials, and other environmental factors. for more information.

* The standard transmission rates--300Mbps (for 2.4GHz), 300Mbps (for 5GHz), 54Mbps, and 11Mbps--are the physical data rates. Actual data throughput will be lower and may depend on the mix of wireless products used.

† The standard transmission rates - 150Mbps (for 2.4 GHz), 300Mbps (for 5Ghz), and 11Mbps - are the physical data rates. Actual data throughput will be lower and may depend on the mix of wireless products used. 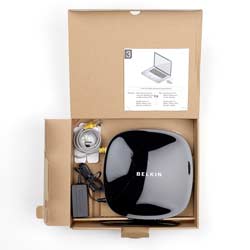 Beware of fakes! When you receive your Belkin Router, verify that you received all items listed in "What's in the Box" and make sure packaging is intact (see photo or setup video)!

Please report to immediately if you have received a product in a different or damaged package. Enjoy your Belkin router!